Throughout the age of preservation, steam locomotives have come and gone. Here, I'll try to highlight some of the more famous of those engines, whose whistle's sang loud into the landscape of the country, but have quieted due to circumstances beyond their control. ​The order of the locomotives listed below does not in any way denote bias towards those groups. The locomotives were added as they came to mind, and are organized alphabetically. If you are interested in the sources used, please see the sources page under the "More" tab.

Baltimore and Ohio #25, AKA "William Mason" 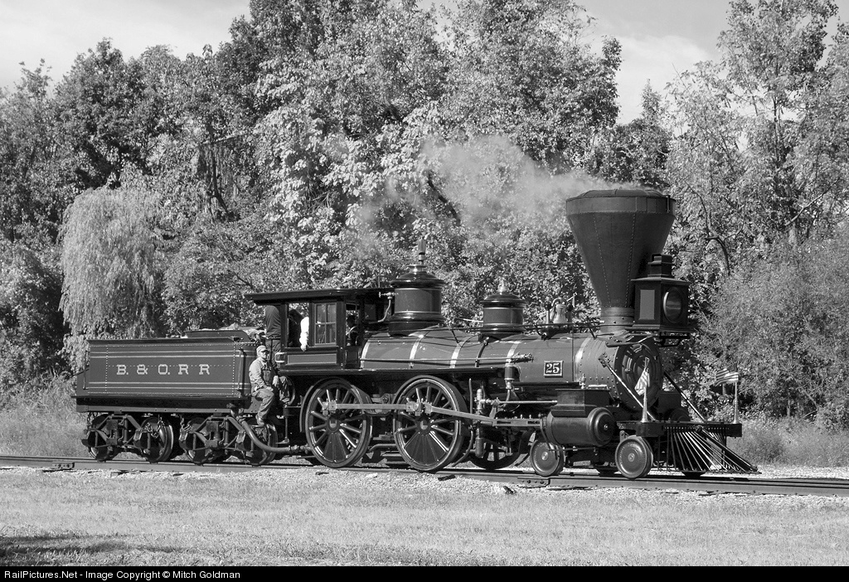 Picture credit - Mitch Goldman (I converted the picture to B&W to fit the page; not done with any ill intent, just to keep the feel of the page. Original Picture is linked.)
Type: 4-4-0 American
Stats:
Year Built - 1856
Built By - Mason Machine Works
Fuel - Wood
Boiler Pressure - 75lbs
Driving Wheel Diameter - 58in
​     Tractive Effort - 6,225lbs
Top Speed - 30mph
Road History - Baltimore and Ohio Railroad
History:
The Baltimore and Ohio was the first railroad in the United States, intent on linking the city of Baltimore with the wider western world. This mission gave the railroad a clear objective, allowing it to also become one of the first highly successful railroads in the USA, hauling goods from East to West and back again. One of the reasons for this early success were the 4-4-0's that graced the rails of the B&O, engines that, for their time, were both fast and powerful. They were used on passenger trains and freights equally, and excelled in both services. These engines went to battle for the Union during the US Civil War (1861-1865), pulling troop trains, supply trains and medical trains throughout the conflict, and continued to serve the railroad for years thereafter.
Summary:
The William Mason, named for the founder of the Mason Machine Works, has had a long, long life. While it's very likely that little of the original 1856 engine survives (the locomotive was shopped in 1927), the fact that even parts of that same engine are nearly 164 years old, well, that's impressive. In her retirement, the 25 has occasionally been steamed as an excursion or display engine, and ran in many movies over the years. She was last steamed in 2012, and as of 2017 was cosmetically restored and parked in the B&O Railroad Museum's roundhouse in Baltimore.
Operational Future:
In a word, unlikely. The museum has a few other candidates that they could choose to operate and, given the age of the William Mason, it's likely that another engine would be selected. However, there are photos and videos of this old iron horse in action, and she's certainly in good hands with the B&O Museum. Check her out on display, and say thanks to the old girl for all the shows she's put on over the years!
Links:
B&O No. 25 "William Mason."
YouTube 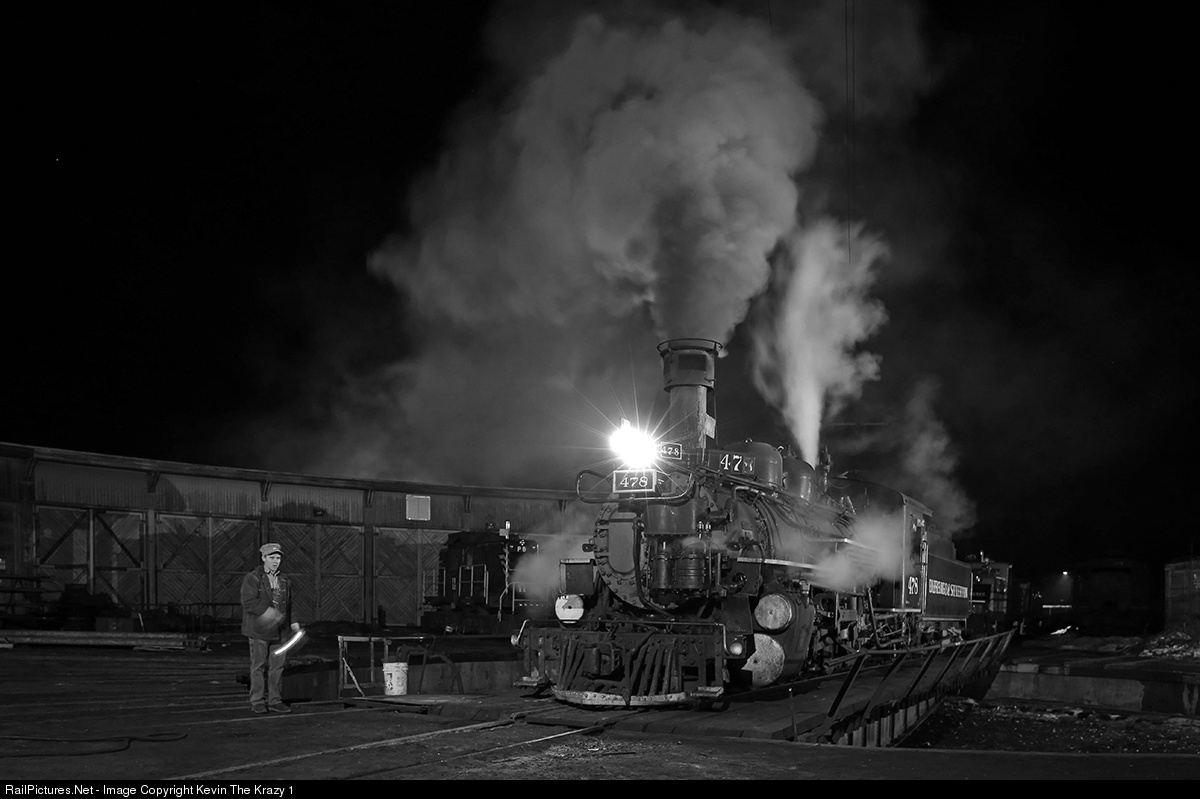 Picture credit - Kevin the Krazy 1
Type: 36" Gauge 2-8-2 Mikado
Stats:
Year Built - 1923
Built By - American Locomotive Works
Fuel - Coal
Boiler Pressure - 200lbs
Driving Wheel Diameter - 44in
Tractive Effort - 27,540lbs
Top Speed - 45mph
Road History - Denver and Rio Grande, Durango and Silverton
History:
The modernization program undertaken by the D&RGW was extensive, and brought many new classes of engines to the railroad. New classes of engines were designed, built and delivered to the railroad throughout the mid-1920s. The 478 was among those engines, and spent its life working for the D&RGW.
Summary:
There are workhorses, and then there are engines like 478. She'd been in active service for close to a century. First on the Rio Grande, then hauling tourists up and down the Rockies. All that work finally caught up to the engine. Every part on a steam locomotive wears out, just like the parts on your car. The work required to bring 478 back into service was too much, and the D&S has retired, for now, this proud engine.
Operational Future:
It had been such a good run for the 478. She was one of only 2 locomotives to have never been retired between their time on the Rio Grande and on the Silverton. But every workhorse needs some rest, and the 478 has more than earned hers. With many other locomotives in steam, and sister engine #493 undergoing restoration and conversion to oil firing, it looks unlikely that 478 will return anytime soon. She's earned some time off anyway.
Links:
Durango and Silverton
YouTube 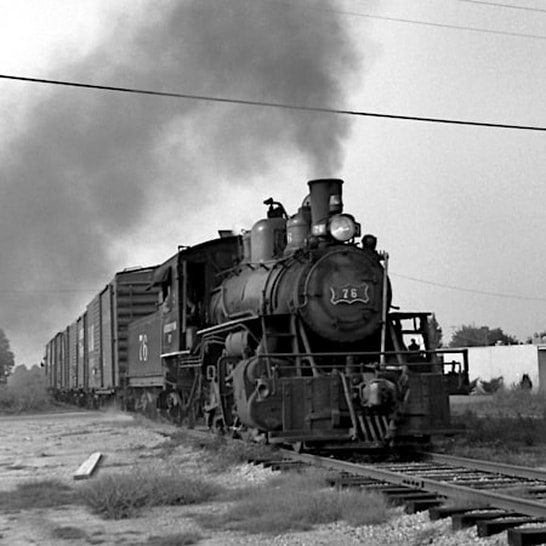 Picture credit - Hawkins Rail
Type: 2-8-0 Consolidation
Stats:
Year Built - 1920
Built By - Baldwin Locomotive Works
Fuel - Coal
Boiler Pressure - 200lbs
Driving Wheel Diameter - 51in
Tractive Effort - 29,050lbs
Top Speed - 50mph
Road History - Jonesboro, Lake City & Eastern Railroad, Frisco (SL-SF), Mississippian Railway, Penn View Mountain Railroad, Gettysburg Railroad.
History:
Short lines made use of all sorts of engines, including the most famous wheel arrangement for a steam locomotive; the 2-8-0. Shortline railroads, however, ordered smaller examples like the #76. Compact and powerful, they made short work of most of the tasks needed on the railroads they served. But, unlike a number of shortline engines, the #76 served a Class 1 in the St. Louis - San Francisco (Frisco or SL-SF for short) railroad as a branch line engine. After the Frisco sold her to the Mississippian, she returned to short line service and eventually to tourist operations.
Summary:
The Gettysburg Railroad was not exactly an operation known for taking care of its engines. While the 76 did alright, she was well worn out when the end came. She was acquired by the Steam Railroading Institute in Owosso, MI, and for a time was under operational restoration there. However, it was unfortunately not to be, and the locomotive was sold to the Oakland B&O Museum, where it received a cosmetic restoration.
Odd Fact:
For a small locomotive, she had a big career and a huge following! And her new role as a static display, cared for by the Oakland B&O Museum, will ensure her survival for decades to come.
Links:
YouTube 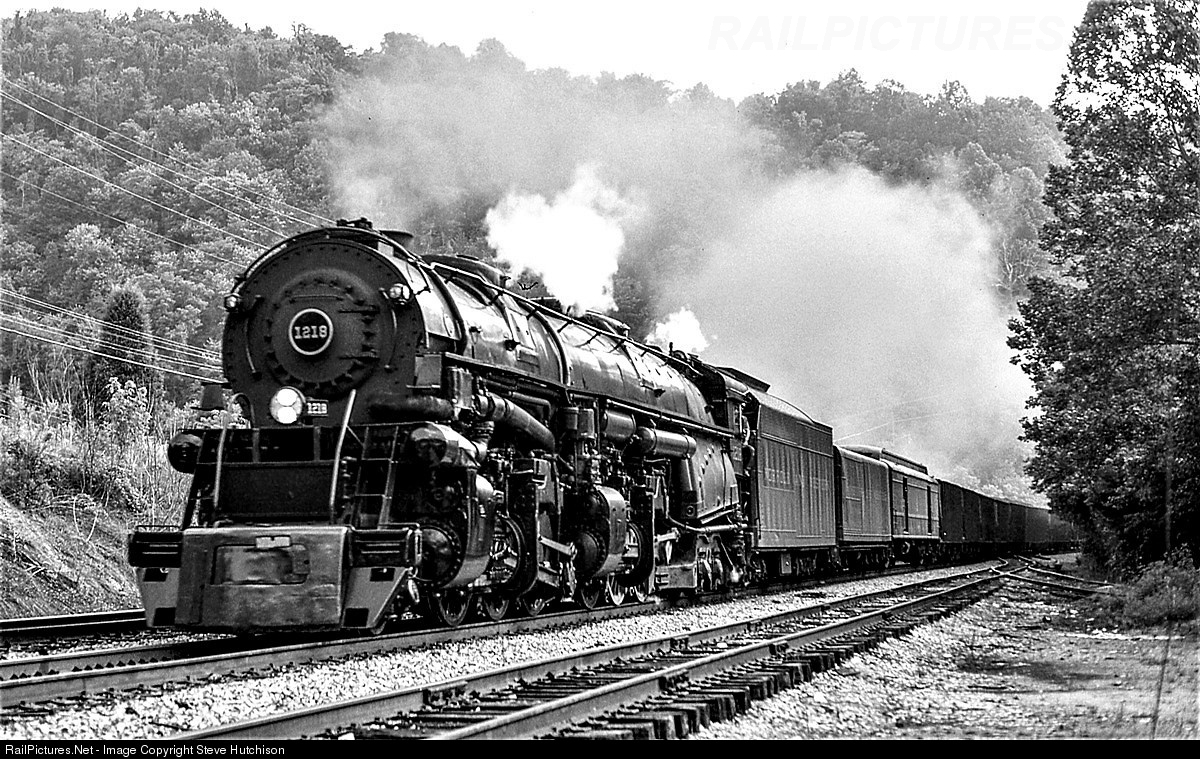 Picture credit - Steve Hutchinson
Type - Class A 2-6-6-4
Stats:
Year Built - 1943
Built By - N&W Roanoke Shops
Fuel - Coal
Boiler Pressure - 300lbs
Driving Wheel Diameter - 70in
Tractive Effort - 114,000lbs
Top Speed - 70mph
Road History - Norfolk and Western
History:
The Norfolk and Western Railroad built some fine machines in their Roanoke Shops, and the 2-6-6-4 design, the Class A's, were no exception. Equally capable of passenger and freight operations, these locomotives were among the finest articulated engines ever built. A signature whistle, the Norfolk and Western single chime "hooter," gave them an unmistakable voice while pounding through the mountainous terrain that the N&W conquered each day. But sadly, only one of these engines survived into preservation, out of quite a fleet built by the railroad.
Summary:
The 1218 was the lone survivor, and sat idle for many years post retirement. A stint at Steamtown first, then on to the Roanoke Transportation Museum saw the engine travel many miles dead in tow, but it wasn't until 1985, at the high point of the Norfolk Southern Steam Program, that 1218 saw life once again. She pulled thousands of happy passengers and, quite memorably, a 100 car coal train during her all too brief 9 year stint in the program. When Norfolk Southern ended the program in 1994, the Class A was undergoing major boiler repairs, which were left unfinished. Since then, however, the locomotive has been in the capable hands of the Virginia Museum of Transportation, sitting underneath a roof, protected from the elements.
Operational Future:
With the 21st Century Steam Program now at an end, it appears that the 1218 will remain an idle piece at the VMT for the years to come. But her short tenure in the program was indeed memorable, and thanks are in order to all of the men and women who made it possible!
Links:
VMT 1218
YouTube 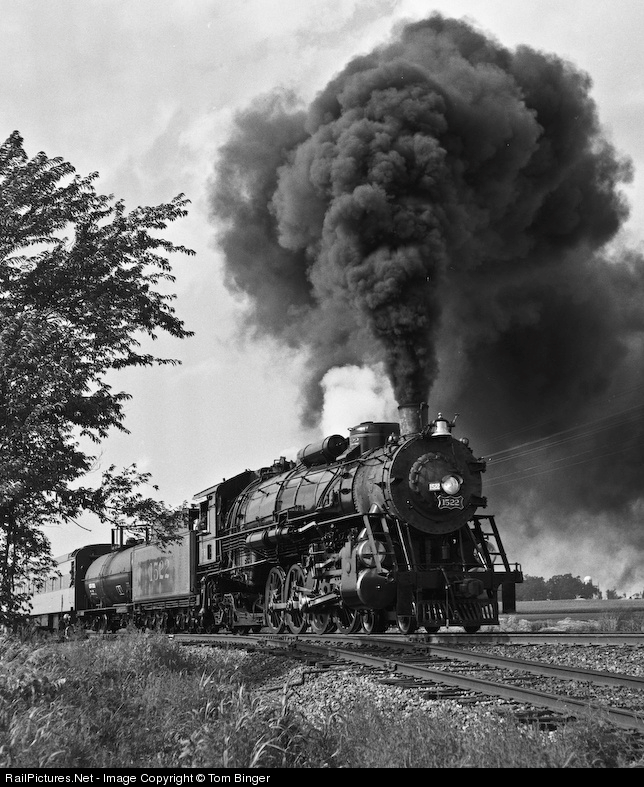 Picture Credit - Tom Binger
Type: 4-8-2 Mountain
Stats:
Year Built - 1926
Built By - Baldwin Locomotive Works
Fuel - Oil
Boiler Pressure - 210lbs
Driving Wheel Diameter - 69in
Tractive Effort - 56,800lbs
Top Speed - 70mph
Road History - St. Louis-San Francisco
History:
Some classes of steam locomotives are just steps ahead of everything else out on the rails. In many ways, this describes the Frisco 4-8-2's. The Frisco liked keeping their steam engines on the modern side, which helped, but these Mountains were in a class all their own. Plenty of speed, plenty of power and plenty of power at speed ensured that these engines had a home both pulling passenger trains and freight trains alike. And the Frisco had a mind for saving their steam power; a number of Frisco 4-8-2's survived being cut up, and can be seen in parks and museums across the country.
Summary:
Frisco 1522 is one of the more missed engines of the preservation era. Her size was not a limiting factor, yet she had power enough to pull a respectable train at mainline speed. And she was capable of delighting railfans the nation over. After her restoration at the hands of the St. Louis Steam Train Association in 1988, the locomotive saw action both near and far. She left her mark, and a reputation. She's the only 4-8-2 to have ever run in excursion service in the US, and during her years operating, she was considered the loudest operating steam locomotive in the country!
Operational Future:
While it surely would be nice to see this beloved Frisco 4-8-2 riding the rails with 210lbs of steam pressure on the gauge, it's very unlikely. The Museum of Transportation in St. Louis have used her as an important display piece in the museum's collection since her re-retirement. Besides this, her condition was well known at the time of her retirement; major repairs would be needed. Still, her all too brief excursion career was quite memorable, and we have plenty of videos to watch and reminisce about!
Links:
Frisco 1522
YouTube 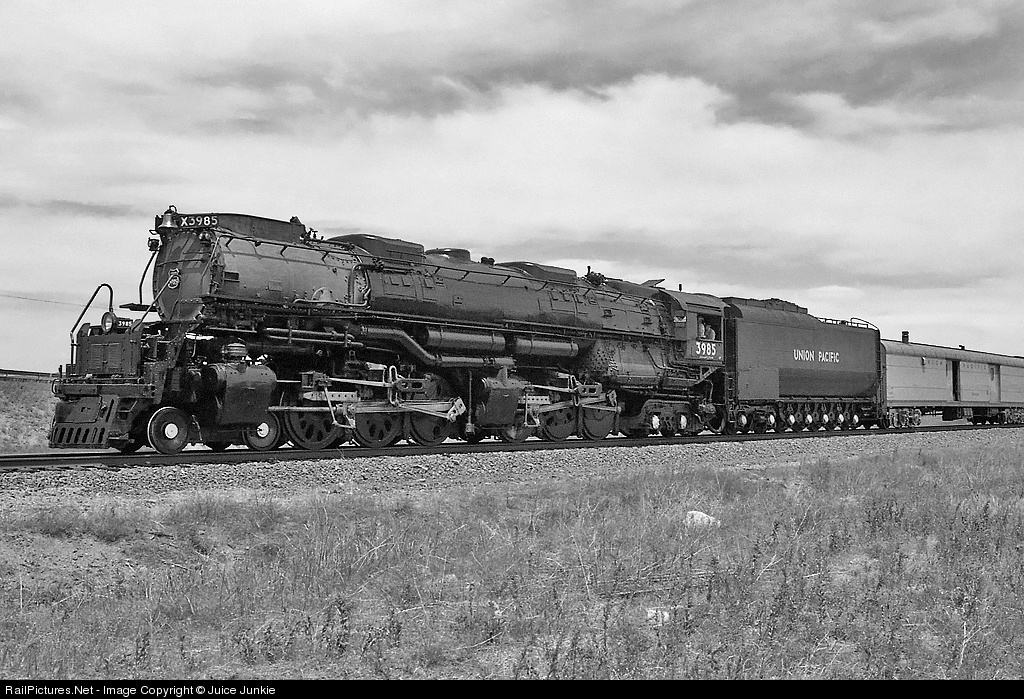 Picture Credit -  Juice Junkie
Type: 4-6-6-4 Challenger
Stats:
Year Built - 1943
Built By - American Locomotive Company
Fuel - No. 5 Fuel Oil (originally coal)
Boiler Pressure - 300lbs
Driving Wheel Diameter - 69in
Tractive Effort - 97,350lbs
Top Speed - 80MPH
Road History - Union Pacific
History:
The Union Pacific Challengers were a unique brand of engines. They were the first articulated locomotives to show that articulated power was for more than just freight drags, that speed could be brought out of such a design. It proved highly successful, with the Union Pacific ordering more than a hundred Challengers during the heyday of steam and numerous other railroads ordering their take on the class. They were versatile locomotives, used for fast freight and passenger service across the many roaming hills on the Union Pacific's right of way. When they time came, they were retired with the other UP steam locomotives. Of the hundreds built for UP, the 3985 is one of two left and the only "operational" Challenger.
Summary:
The 3985 is a locomotive that could be called a miracle. She sat in Union Pacific's roundhouse in Cheyenne from 1962 to 1975, and was put on display near the Cheyenne Depot that year. In 1981, volunteers from the UP started restoring the locomotive for operation. Originally a coal burner, the engine was converted to oil firing in 1990 due to the frequent fires it caused along the tracks. The locomotive last saw service in 2010, and was known to need significant maintenance at that time. As one of only 2 remaining Challengers, she was a popular engine in excursion service and delighted crowds across the United States! Plus she will forever be remembered as the last steam locomotive to pull the Ringling Brothers Circus train in 2010.
Operational Future:
Unfortunately, it appears that the 3985's operating days are behind her. The engine needs significant work to be made road worthy once again, according to quite a few of the steam crew. But, we do have the memories of 3985's memorable trip out East, the run to the Super Bowl and video of the engine taking 143 cars up Archer Hill unassisted, memories that will thrill steam fans for years to come. Thank you 3985 and crew!
Links:
Union Pacific Heritage Website
YouTube
Powered by